Today is the day! The Merge is about to happen. Everything has been building up to these moments, so let’s keep our fingers crossed 🤞🏽and chant ‘all izz well.’

Anyway, let’s get down to business

The market is as straight as an arrow 🏹

With the long-awaited Ethereum just hours away, it was a bearish session for the top cryptos by market yesterday. Ethereum (ETH) and Cardano (ADA) led the way, rallying by 4.09% and 3.66%, respectively. The bearish session is attributed to anticipation of the Merge and the Vasil hard fork.

🛎️Read carefully coz this section WARRANTs some attention.

The whole of last week, Twitter and media bruhs were chattering about LUNA. The coin rose 300% month on month despite not being listed on any major exchange. Some even said LUNA is rising from the dead. And our reaction was like, whaaatt? 🤯

Suddenly around mid-day yesterday, a notification popped. And the price of LUNA fell by over 40% in just one hour. Here’s what the notification read: 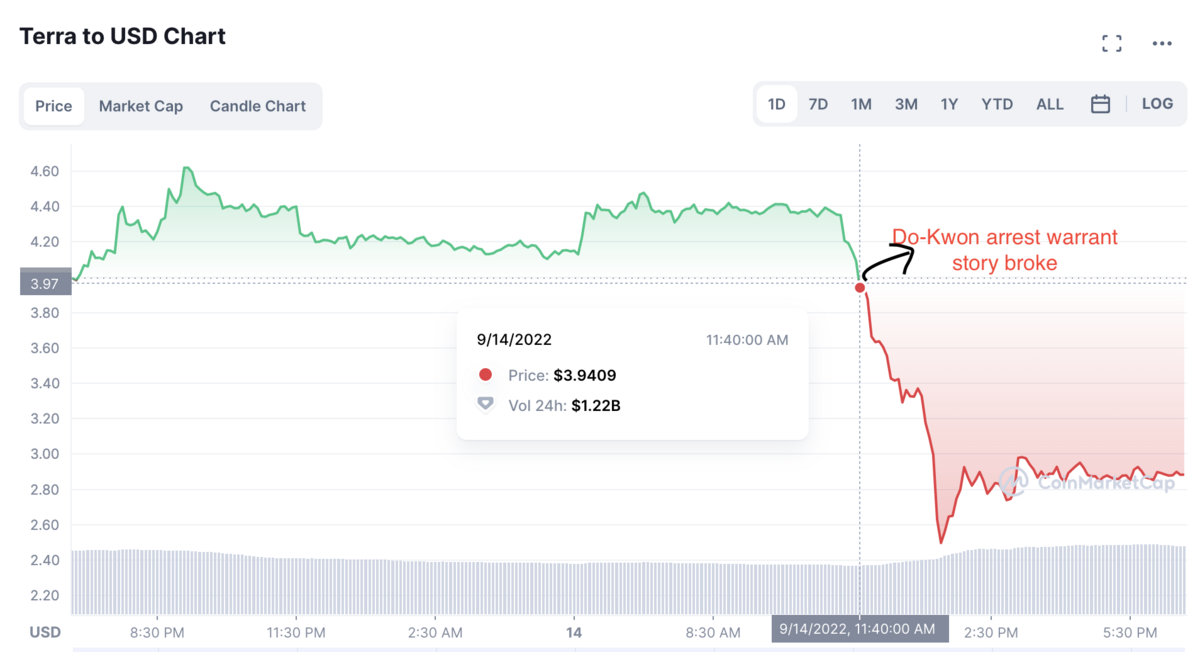 What happened? Why now and not when Terra crashed?

Four months ago, the crypto world nearly saw its black day. One of the top traded stablecoins — Terra LUNA, lost its peg to the dollar leading to the collapse of the $40 million worth Terra ecosystem. We all know that, but we need some context setting, no?

Back to the point. At that time, Korea’s Financial Security Crime team did not have enough evidence against Do-Kwon, co-founder of Terra. So he fled from Korea to Singapore and blamed it on safety issues. Meanwhile, the authorities continued investigating Terraform labs and everyone associated with it.

After some rigorous investigation, police found evidence of “Fraudulent transactions” in the form of investment contract securities, i.e., a contract where one party invests money to get something in return. It seems this violates the Capital Markets Act under South Korean law.

So, the court decided that Do-Kwon and five others, including the founding member Nicholas Platias belong in jail and slapped them with arrest warrants. The warrant is valid for one year, and the manhunt has already begun. So we will have to wait and watch if Do-Kwon Do-Kwon ko pakadna mushkil hai ya namumkin!

Moral of the story: What do we always say? DYOR, DYOR, always DYOR!

What’s on the news today? 📻

Uruguay has proposed a crypto bill, which will significantly change how virtual assets are regulated in the Latin American country. If all goes to plan, the Central Bank of Uruguay (BCU) will oversee and regulate virtual assets. Read more.

📜Ether futures are in demand ahead of the Merge

It’s Merge time, and investors are making their moves evident by showing an increased interest in futures contracts. Not just Ether but derivative contracts involving ETH are also witnessing a surge in demand. Read more.

The Merge is not the first upgrade Ethereum is going through. It has been through many of them in the past, and here’s how the markets reacted to the earlier upgrades.

Ethereum will soon adopt Proof of Stake, which will change how the network verifies transactions. Read about new Ethereum upgrades and how they will impact investors.

Loving Switch Daily? Share it with your friends and spread the love 💙